Mr P Garrard, member of the Club before the war and writer of much of the older history of the Club, sailed in the Creek in the 1920′s pretty much on his own, with a number of other interested sailors joining him until on 24th March 1931 a meeting was held at the Fareham & Country Club in the High Street. The first AGM was held on 14th April and L V See produced the first silver challenge cup, later known as the Peacock trophy and still raced for today. It was presented to the Club by Messrs Peacock & Buchan, antifouling paint manufacturers of Southampton. 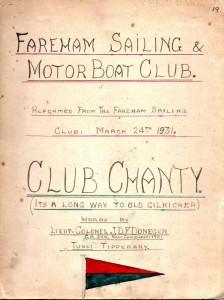 ve permission to erect a notice board in his offices under the viaduct facing the creek. Captain W B Macdonald DSO was appointed Commodore of the newly formed F 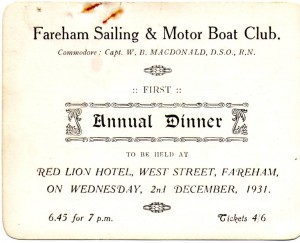 areham Sailing and Motor Boat Club, so called because of the number of motor boats around at that time. The first Dinner and Dance was organised at the Red Lion, which was to become an annual event. The Rear Commodore sang the “Club Shanty”, a humorous tail of Club sailing antics to the tune of Tipperary.

The Club then purchased its first Headquarters, a World War I Motor Launch, which was 80 feet long and was moored close to where the Castle in the Air Pub is. The Club went from strength to strength in its first few years but then with the death of its founding Commodore, Capt Macdonald, and the departure of other key members by 1935 the Club was floundering. It ceased many of its activities and the Club Boat fell into disrepair. 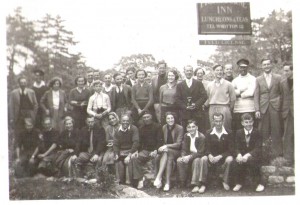 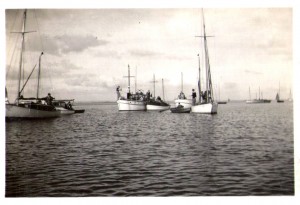 The Club revived again in 1937, after nearly being wound up, thanks to the efforts of a few, notably P Garrad, who did fantastic work in getting things going and becoming its Secretary. There was a new Commodore, Mr A A Atkins, the Club started to rebuild Membership and refurbish the Club’s Ship. The Club became very active up until the war with Membership reaching 100 in 1938. There were many rallies, races, rowing races, (the Club acquired rowing boats). There were talks on the Club boat in the evenings, dances, visit from other Clubs, the first “At Home” event in 1938 when Victories and Handicapped race boats numbering about 30 came up from Portsmouth. Even Amy Johnston, the famous aviator visited the Club at this time.

On September 3rd 1939 war was declared which had profound implications for the Club. Few Members realised it would take six long years before the Club would again function. Black out regulations came into force and numerous notices came out to mariners, the whole of Portsmouth Harbour past Bedenham was out of bounds without special passes. The general opinion among active members was that the Club should keep going as long as possible. To make matters worse in January 1940 the whole Creek froze over down to Foxbury Point with people skating in the middle of the Creek opposite Salterns.

Members’ numbers were reducing, as they got called up for active service, but an AGM occurred in April 1940 and Leslie See took the Chair as Rear Commodore. There were about 30 members present. One thing that was started was a “Letters Night” on the ship when members would read letters from loved ones and friends far away. On July 13th 1940 all boats were immobilised and had to be removed from the water. On Aug 18th Members saw a German Fighter appear over the Creek and shoot down a Barrage Balloon over Cams. 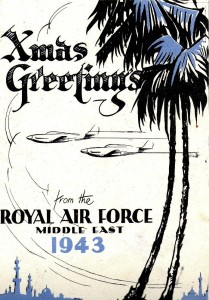 ebt of gratitude is owed to John Garrad, Hon Secretary of the Club, who kept the Club going during the war, holding on to his own and the Club’s Log Book. AGMs regularly took place to ensure things kept going. On Nov 6th 1940 W H Sutton, Secretary from the 1905-1914 and his wife were killed by a bomb which had a direct hit on their house in Southampton. In 1941 a Club Party was held at the Golden Lion in Fareham, with all remaining members. On 10th January the Club Ship nearly got hit from a bomb which landed very nearby in the Creek. By the end of 1941 about 50 members were serving in the war, including 7 ladies from the Ladies Rowing Section in the W.A.A.F. In 1942/43 visits to the Club Ship reduced, in 1942 it got badly vandalised, very sadly. In 1944 prospects for the end of the War were brightening. The death of Percy See, the boat builder, was announced at this time, who had been a Member of both Clubs since 1901. The Council at this stage was trying to get the, by now, dilapidated Club Ship taken away, which was removed shortly after with permission from the Commodore AA Atkins. It was  finally towed away by Harry Feltham and ended up being set alight on VE Night on 7th May, 1945. What a way to go!!

Christmas Greetings from Leslie Birks, Sailing Secretary, in service in the RAF in Egypt.