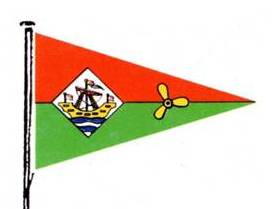 John Garrad had, heroically, kept the Club going through the war and a “Restart Meeting” held at Westbury Manor, home of Fareham Urban District Council, in April 1946. It changed to the 15th AGM, when it was realised so many had turned up and the Committee and Flag Officers were pretty much still intact. Mr Leslie See took over as Commodore from AA Atkins. Races restarted quickly with many pre-war boats taking part.

The Club then managed to acquire a new home, with the lease of a rope store on the quay from FUDC and quickly started making improvements. The Club began to change, and modernise, the Rowing Sections never re-started, but new life was beginning in the life of the Club.

In 1948 class racing was begun for the new National 12 dinghies. This was an innovation – single class replacing handicapped as before the war. Dinghies were becoming faster and lighter. 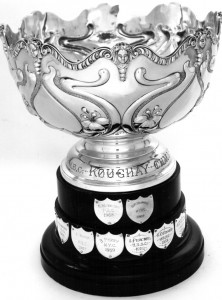 In 1949 the Town Regatta was started again. Also in 1949 winter racing started and FSMBC was one of the pioneers of winter racing on the south coast. Several keen sailors came out of this innovation, Jack Chippendale, Bruce Banks, Ian Proctor, John Oakley, John Jeffrey and Geoff Budden. Some of these went onto Olympic racing. The Roughay Bowl was donated to the Club in 1952 by Fred Dyke for the Frostbite Series and became keenly fought over and Fareham became the focus of national interest in Winter Racing.

The Roughay Bowl, presented in 1952

Meanwhile Leslie See, was replaced by Mr C Knight, as Commodore followed by Mr J C Tappenden, who had been instrumental in acquiring the new Club premises, took over in 1954. By 1957 the Club was going from strength to strength, with membership increasing, a thriving Cadet Section and continuously improving Club premises, due to the hard work of many members. A BBC program had featured the Frostbite Series in a program “Sport in the West”.

By the time of the October 1959 AGM, held at Westbury Manor, there were 186 Full Members and 62 Cadet Members. Things were going well for the Club, it had settled down nicely after the war. A period of sustained growth and development ensued over the next years to come.

Captain R L Clode RN was elected unopposed as Commodore at the 30th AGM held at the Fareham Masonic Hall on 19th October 1960. At that same meeting a proposal to install a bar in the Club house was defeated, but not long after the much loved bar was built and has been a focal point of the Club House ever since. The Winter Frostbiting Series was going well, with Albacores, Enterprises and Fireflies taking over from National 12s during the winter. 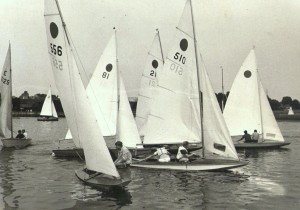 Fireballs Racing for the Roughay Bowl in the 1960s

In 1964 the nearby slipway was rebuilt in concrete and became a very useful launching slip, as it is today. By this time Fireballs had made their appearance on the Creek and in the Club, being made by Jack Chippendale’s business in the large wharf building. 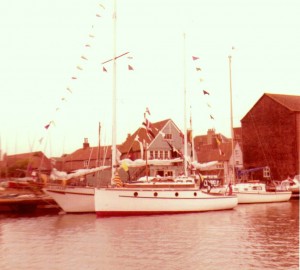 The Clubhouse was further improved with a balcony and fire escape at the back of the Club, so for the first time members could get onto the outside of the Clubhouse from the upstairs saloon.

Mr F S Drake was elected as Commodore at the 1961 AGM. By 1963 the membership had exceeded 250 and was making continued progress. The bar was in full use and bar tenders had been trained up.

In 1964 Maurice Penning took over from Francis Drake and then Harry Mitchell served from 1967 to 1970. At this time there was a thriving Cadet section, which had a large number of Members, who used to have meetings in the loft area of the Club House and get up to all sorts of high jinks.

Fireflies being launched for the Frostbite Series.

In 1970 John Jeffrey became Commodore until 1973, when Keith Bre 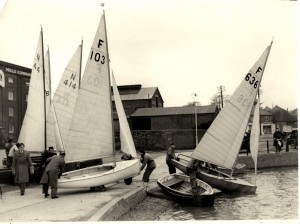 wer took over, who did a large amount for the Club and was an instrumental part of the team which put on the 1975 anniversary celebrations for the Club, including an historical montage of key events from 1850 to 1975. Also a history of the Club (ring bound blue book). Douglas Brook was also a big part of the 125th Anniversary and a number of events were held to celebrate. Douglas, known as Gerald, became Commodore in 1976, followed by Eric Absolon in 1971. The Club was now in good shape at the end of the 70s, with more structured Flag Officer succession and Committee structure, as well as a growing Membership, up to over 300 at this stage.