Ostrobogulous Definition – Humorous, used to designate something that is slightly risqué or indecent! In our case its a system for working out a Race series Champion & encouraging turn out for club racing.

We will be running this alongside our ‘official’ results for the Lugger Summer series. This is just being done as a bit of fun, to generate interest and discussion.

Originally it was first adopted by a single fleet in 1971 and is now used by over 40 clubs throughout Great Britain.

One of the main benefits is that it creates interest and thereby encourages turnout.

The salient features are:
Everyone starts at 0; the helmsman with the highest score after the last race is the winner.
After each race (even after the first race) there is a cumulative total so that at any time in the season each competitor can see where he stands in relation to the others.

Points are awarded to all contestants that cross the start line and also are awarded for beating other helmsmen who are as good or nearly as good as they are. i.e. a good helmsman does not gain any points for beating one with a substantially lower score.

There are no discards allowed.

The length of the series is not important, but the system works best with more than 8 races. This year the Lugger Summer series will run to 21 races – so should be an interesting run. Ties sometimes occur at the end of a series; they cannot be broken and must stand.

Ostrobogulous results will be displayed alongside our Official results, on noticeboard in Clubhouse corridor. This will enable you to compare the two systems. Check out and give us your views.

Please click on link below to view latest race results:

Congratulations  to Tony Cleal and Kevin Abbot for 1st & 2nd in series. 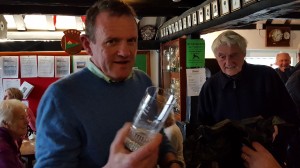 Please click on link below to view latest Lugger results.